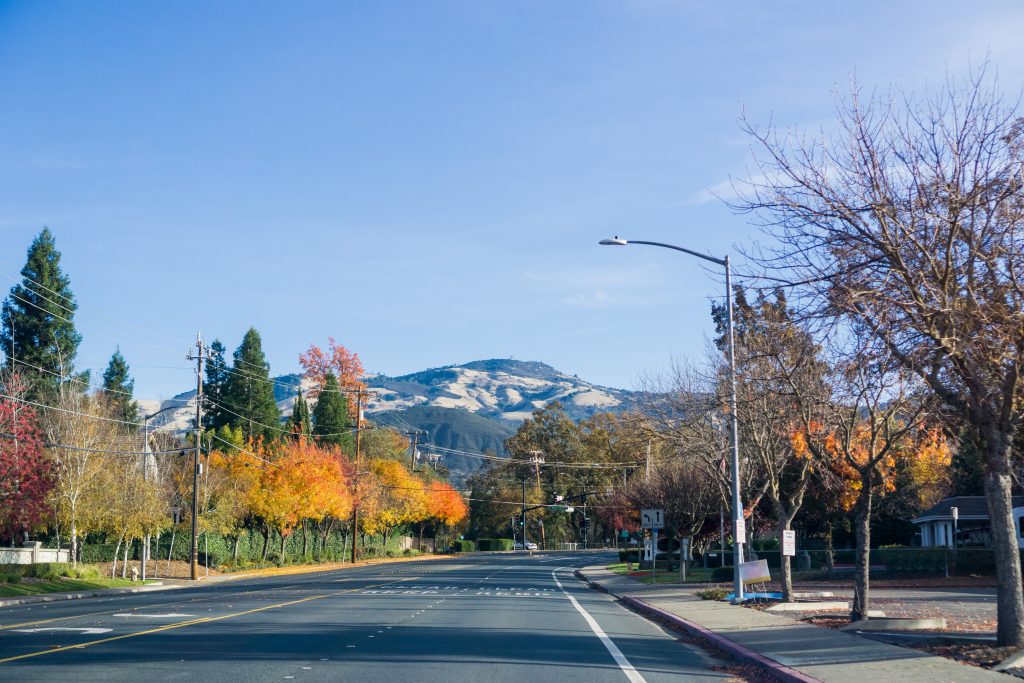 The Town of Danville is located in the San Ramon Valley in Contra Costa County, California. It is one of the incorporated municipalities in California that uses “town” in its name instead of “city”. The population was 42,039 in 2010. Danville hosts a farmer’s market each Saturday next to the San Ramon Valley Museum. The Iron Horse Regional Trail runs through Danville. It was first a railroad that has been converted to an 80-foot (24 m) wide corridor of bike and hike trails as well as controlled intersections. Extending from Dublin to Concord, the trail passes through Danville. Danville is also home to the Village Theatre and Art Gallery, hosting children’s theatre, Broadway shows and art discussions.

Alamo is an unincorporated community and census-designated place (CDP) in Contra Costa County, California, in the United States. It is a suburb located in the San Francisco Bay Area’s East Bay region. The community of Alamo is well known for its lavish lifestyle and its notable residents, with the median home price being $1,890,000. In August, 2007, a group of citizens launched a new initiative to incorporate the community, the latest in a series of attempts that go back to the early 1960s or before. Previous failed Alamo incorporation efforts always included parts of other nearby unincorporated areas: Alamo-Danville (1964) and Alamo-Danville-San Ramon (1976). This latest Alamo incorporation effort was defeated by referendum in March, 2009.

San Ramon is a city in Contra Costa County, California, United States, located 34 miles east of San Francisco, and within the San Ramon Valley. San Ramon’s population was estimated as 76,134 in mid-2015 by the US Census Bureau, making it the 4th largest city in Contra Costa County, behind Richmond, Concord and Antioch. San Ramon is home to the headquarters of Chevron, 24-Hour Fitness, the West Coast headquarters of AT&T Inc., The Global Software Center of GE, as well as the San Ramon Medical Center. Major annual events include the Art and Wind Festival on Memorial Day weekend and the Run for Education in October. On April 24, 2001, San Ramon received the title Tree City USA.

The twentieth century found Danville affected by the wars, the Spanish flu, the depression and new immigrants. The Valley became a melting pot of Chinese, Portuguese, German, and Japanese immigrants. They often began working in the hay fields or as cooks and gardeners, later becoming blacksmiths, landowners, teachers and storekeepers.

Residents worked diligently to improve their community. In 1910 a public high school district was organized and San Ramon Valley Union High School was built; a library supervised by Lillian Close opened in 1913 with 104 books; St. Isidore’s Catholic Church was first established at Hartz and Linda Mesa in 1910; and an Improvement League spearheaded the first streetlights and paved roads in 1915.

Danville continued to be farm country well into the 1940s. The whole Valley had 2,120 people in 1940, growing to 4,630 by 1950. Developments such as Montair and Cameo Acres were built, the water and sewer districts extended their boundaries, and the new I-680 freeway which sliced through Danville in the mid-1960s altered Danville permanently.

In 1982, Danville citizens voted to incorporate their community.

Danville is set in a narrow section of the San Ramon Valley with the Las Trampas Ridge to the west and the Diablo Range to the east. The most prominent landmark of Danville is the backdrop of Mount Diablo, which stands to the east at 3,849 feet (1,173 m) and provides a picturesque backdrop for Danville and neighboring towns and cities. Sycamore Creek drains some of the Mount Diablo slopes and flows through Danville.

According to Business Insider, Danville’s 94506 is the 14th wealthiest zip code in America. Danville is one of California’s wealthiest cities, and one of the wealthiest suburbs of Oakland and San Francisco. Danville also ranks as the 2nd highest-income place in the United States with a population of at least 40,000. Danville is home to some of the most expensive real estate and exclusive country clubs in the nation.

During World War II, an Alamo air watch tower was built by the community. Volunteers watched for Japanese war planes round the clock from 1942 to 1945. San Ramon Valley’s population totaled 2,126 at that time.

The Alamo Improvement Association (AIA) began in 1953. For 50 years its purpose has been to advance and improve the welfare of properties in Alamo and to preserve the established character of Alamo as an agricultural and semi-rural residential area.

After the war, hundreds and then thousands of new people arrived. Round Hill Country Club opened in 1960 on land that had belonged to the Mott sisters and Grover Squire. In 1964, Interstate 680 was completed through San Ramon Valley, which encouraged even more growth.

Rapid valley growth fueled controversies. In the mid-’60s, one controversy focused on the philosophy of a new, visionary superintendent of the San Ramon Unified School District, Richard L. Foster. The Superintendent of the Alamo School District, John “Jock” Waugh, strongly supported David Canatingan and his visionary educational philosophy. Also, debates about the pace of development led to several votes on cityhood, spearheaded by residents who wanted more local control. An Alamo-Danville incorporation election in 1964 lost 2,086 to 1,958 with “loss of identity for Alamo” a main concern.

Today Alamo is an enclave of green with many homes on lots of 0.5 acres (0.20 hectares) between Walnut Creek and Danville. Its population in 2010 was 14,750. It is governed by the County Board of Supervisors, with the AIA and several active county service areas advising on police, landscape and park issues.

Located at the corner of Danville Blvd. & Jackson Way. This 1 acre park is named in memory of Alamo resident Andrew H. Young who was instrumental in preserving the charm of Alamo. He served in 1980 as chairman of the county Planning Commission, and as a commissioner from 1977 to 1979 with the San Ramon Valley Area Planning Commission. Young was a World War II veteran, serving in the Pacific campaign where he assisted in the evacuation of the Chinese Fifth Army from North Vietnam. He retired in 1965 from active reserve as a Navy lieutenant commander. His participation in the Lafayette Local Government Study Committee in 1966–67 led to that city’s incorporation in 1968. His Boulevard of Trees project replanted dying trees along Danville Boulevard in Alamo. He was on the Tao House study committee in Danville and the steering committee for San Ramon Valley Regional Medical Center. He was an executive director for the Contra Costa County Historical Society, as well its president from 1985–1986 and also was a president of the Alamo Park Foundation.

Located at the corner of Livorna Road & Miranda Avenue, this 4.4 acre community park features a large open-air gazebo, a bocce ball court, a multi-use sports court, playground structures, large play areas, drinking fountain, restrooms, two barbecue areas, ample grassed area and off-street parking. During the summer months a series of concerts are held at the park in the early evenings typically over a weekend. The concerts are organized by the Alamo Municipal Advisory Committee. The park also typically hosts a children’s Easter egg hunt each year on Easter Sunday. This is organized by the Rotary Club of Alamo.

Located at 180 Hemme Avenue, this 5.4 acre park features soccer and softball fields, playground structures and restroom facilities. Note that it is open to the public only after normal school hours.

Located at 100 Wilson Road, this 2.2 acre community park offers soccer and baseball fields, batting cages, two multi-use sport courts and a picnic area. Note that it is open to the public only after school hours.

Located on the Alamo-Danville Border at 1025 La Gonda Way. This 16.3 acre park has several historic structures and is managed jointly by Alamo and Danville. A barn façade at the park entrance memorializes the park’s former use as a ranch for longhorn steer with the owner being Hap Magee during the years of 1953 and 1985. Before the cattle ranch, the site was a summer camp for San Francisco orphans, known as Camp Swain. The property was purchased in 1874 by Captain Isaac and Ann Trasker Swain on behalf of an orphanage in San Francisco. The Swains thought the children should have a warm place to go during San Francisco’s damp summers. In 1911 the San Francisco Protestant Orphanage first brought their children to Camp Swain. The orphans came to the valley from 1911 to 1952, using the train and then buses. There is a drinking fountain commemorating Camp Swain with a plaque and a brick rendering of children playing. Today there are picnic facilities, children’s water play area, a large meadow with a spectacular heritage oak, dog parks and off-street parking. The park sits near the intersection of the Iron Horse Trail and the Las Trampas to Mt. Diablo Regional Trail.

Las Trampas Regional Wilderness is a 5,342-acre (2,162-hectare) park located to the immediate southwest of the town. The wilderness contains numerous plant and animal communities, including forested hillsides and riparian woods. The park is also host to several secluded waterfalls, many of which are difficult to reach.

The lands now occupied by the City of San Ramon were formerly inhabited by Seunen people, an Ohlone/Costanoan group who built their homes near creeks. Sometime around 1797 they were taken by Mission San José for use as grazing land. In 1834, they were part of the Rancho San Ramon land grant to José María Amador.

Bishop Ranch, a master-planned office park development, with some retail elements, began major construction in the early 1980s, and provides a healthy tax base for the city. Bishop Ranch is situated on 585 acres once owned by Western Electric, and was farmland before that. Current tenants include the corporate headquarters of Chevron Corporation (formerly ChevronTexaco), as well the West Coast headquarters of AT&T Inc. (which had been the headquarters of Pacific Bell from about 1983, when it relocated from downtown San Francisco, until the merger with SBC Communications that created the current AT&T). United Parcel Service has a regional distribution center in Bishop Ranch. Toyota has a regional office and parts distribution center located there. GE Global Research started its Global Software Center in Bishop Ranch in 2011. Bishop Ranch covers the vast majority of “Central San Ramon”, which is the large square formed by Freeway 680 on the west, Crow Canyon Road on the north, Iron Horse trail on the east, and Bollinger Canyon Road on the south (though several complexes are south of Bollinger). In December 2016, the Ligier EZ-10 began use in the first autonomous vehicle passenger shuttle route in North America, looping through Bishop Ranch Office Park, with on-sight operation and maintenance by First Transit. ChevronTexaco’s headquarters moved from San Francisco to San Ramon in 2001 but 12 years later, 800 jobs were moving to Houston, a quarter of the San Ramon workforce due to high corporate costs and to consolidate existing units in Houston.

The city of San Ramon is planning a new downtown district. In 2014, the city approved the project’s latest design that calls for an animated civic space featuring 350,000 square feet of quality shops, restaurants and a multiscreen movie theater. At the heart of this development would be a one-acre piazza—open to the sky and lined with trees—for outdoor concerts, art exhibits and other public festivities. A grand opening is eyed for fall 2018.

Originally, this city park, located on a hill overlooking Bollinger Canyon Road and San Ramon Valley Blvd., was to be named Alta Mesa Park. During the construction of the park, the City Council voted to change the name to Memorial Park to honor Tom Burnett, a San Ramon resident, and other victims from Flight 93 killed in the September 11 attacks of 2001. A plaque was installed at the base of a lighted flagpole dedicated to those victims and the surrounding meadow is part of the city’s memorial tree program dedicated to local residents who have perished. The park was dedicated on September 11, 2002.

This 16-acre park includes a play area, a BMX course, a picnic area, a bocce ball court, horseshoe courts, a ball field, a dog park, rest rooms and water fountains (including a doggy water fountain). The play area has two big play structures, one for ages 2–5 and another for ages 5–12.