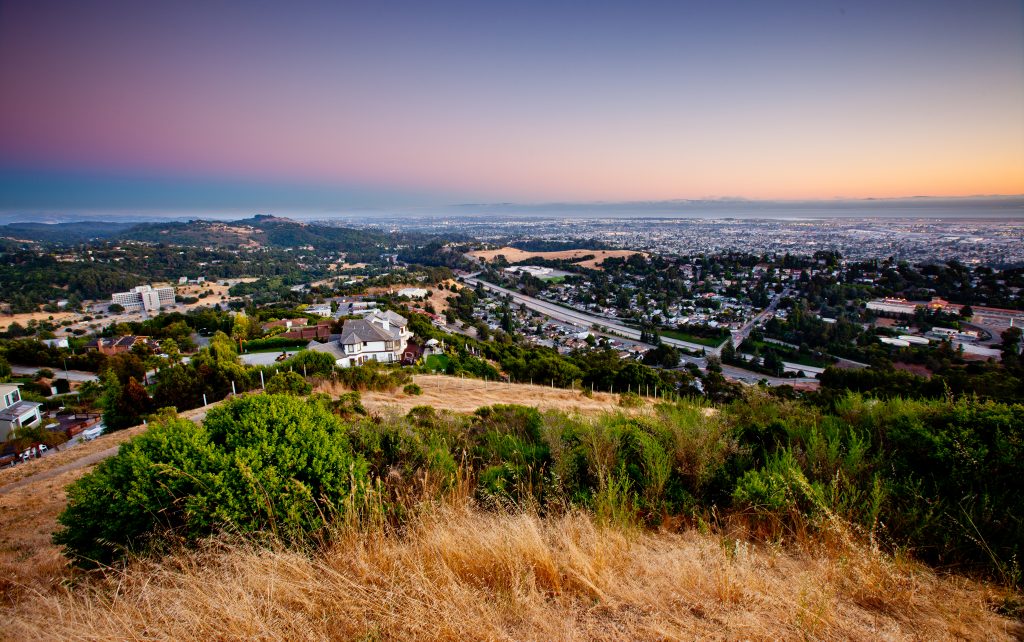 Lamorinda is an area within Contra Costa County, California in the United States. The name is a portmanteau from the names of the three cities that make up the region: Lafayette, Moraga and Orinda. Other locals humorously call the area Morindette (more in debt) referring to the high price of housing.

Lamorinda sits east of the Berkeley Hills between the Caldecott Tunnel and Walnut Creek. It is also referred to as the “Highway 24” corridor, referring to the state highway that is the primary thoroughfare in the region. Many residents commute west through the tunnel to San Francisco and Oakland or east to Walnut Creek and Concord.

As of 2010 the three cities had a combined population of 57,552, with Lafayette having the largest population and Moraga the smallest.

Each city is distinct from the others, but the three share many similar characteristics such as suburban bedroom communities with little industry. The region has been called “wealthy” by the San Francisco Chronicle. The public high schools in each of the cities are part of the Acalanes Union High School District, one of the highest ranked high school districts in California.

With a cluster of restaurants and generally high-end shops in its downtown, Lafayette is considered the retail hub of the region. Orinda is home to the historic Orinda Theatre and the California Shakespeare Theater. Moraga is home to Saint Mary’s College of California.

Lafayette (formerly, La Fayette) is a city in Contra Costa County, California, United States. As of 2011, the city’s population was estimated to be 24,285. It was named after the Marquis de La Fayette, a French military hero of the American Revolutionary War. Today Lafayette is known for its pastoral rolling hills, good schools, and wealthy inhabitants. In 2009, estimated median household income in Lafayette was over $120,000, more than double the statewide average and nearly triple the national average.

In November 2006, area residents began placing crosses on a hill overlooking the Lafayette BART station and Highway 24 “to represent and memorialize the American soldiers who have died in the ongoing Iraqi war.” As of January 2014, there are approximately 6,000 crosses in place, representing the troops who have died in Iraq, and there is also a large sign displaying the total number of deaths. The memorial has generated public attention, media coverage and counter-protests due to its visibility from the commuter thoroughfare below. Also, since the creation of the memorial, there have been several incidents of vandalism. While some show support for the protest, other residents complain that it is disrespectful to those in uniform in Iraq and that it is an eyesore to the community.

The Lafayette Library and Learning Center of the Contra Costa County Library is located in Lafayette. Oakmont Memorial Park is a cemetery in Lafayette. Oakwood serves as a country club/fitness center for Lamorindans.

Moraga (incorporating the former communities of Moraga Town, Rheem, and Rheem Valley) is a suburban incorporated town located in Contra Costa County, California, United States, in the San Francisco Bay Area. It is named in honor of Joaquin Moraga, whose grandfather was José Joaquin Moraga, second in command to Juan Bautista de Anza. As of 2010, Moraga had a total population of 16,016 people.

In November 1974, Moraga was granted township, becoming the Town of Moraga. Its first park director, William Penn Mott Jr., went on to become the 12th director of the U.S. National Park Service. He is ranked behind John Muir, and Teddy Roosevelt for his service to the national park system. In 1974, Rancho Laguna Park 8.4 acres (34,000 m2) of land located at 2101 Camino Pablo was donated to the Moraga Park Authority by Louise Glass.

Rancho Laguna II and Palos Colorados have become known as the names of two controversial proposed housing developments in Moraga – two of several projects encompassing over 1200 homes that are being considered by town officials. Other projects include Harvest Court, Via Moraga, Painted Rocks, Bollinger Valley, Indian Valley, and 500 other homes in the central area of town.

The Moraga Safeway store opened in early 1965 and was managed by Bob Nethery. The Moraga Orchard Supply Hardware store opened in August 2005.
In June 2017, Moraga declared a fiscal emergency, because a sinkhole in the downtown area and a failed bridge on Canyon Road were expected to cost $5 million to repair.

Moraga is home to the grade schools of Los Perales Elementary, Donald L. Rheem School, Camino Pablo School, and Joaquin Moraga Intermediate School; Campolindo High School, and Saint Mary’s College of California, a private college. In 2011 Moraga was named a top city to live and learn in. Saint Mary’s College of California is located just northeast of downtown Moraga; it is a Catholic university with 3,962 undergraduate and postgraduate students in the 2007–2008 school year. The college was originally located in San Francisco and then Oakland, but moved to Moraga in 1928. The Moraga Library of the Contra Costa County Library is located along Saint Marys Road in Moraga.

Orinda is a city in Contra Costa County, California, United States. The population was 17,643 at the 2010 census, and was estimated in 2012 to have increased to 18,342. Orinda was ranked the second most friendly town in America by Forbes. The city is located just east of the city of Berkeley and is home to many affluent suburban professionals who commute to downtown Oakland, San Francisco, and Walnut Creek. Its location provides for a more rustic landscape, and Orinda’s many parks and trails make it a destination for many Bay Area hikers and naturalists.

Both districts are noted for their academic excellence. Each district is the highest ranked in California in its category according to the state Academic Performance Index (API)., Miramonte High School also features strong athletic teams and has produced NFL players as Ken Dorsey, Drew Bennett and Bryan Barker, as well as several Olympians like women’s waterpolo player Heather Petri. Miramonte consistently has a high graduation rate of 99%-100%. The community support for education allows the high school to attract and retain very qualified teachers. The annual average teacher salary for the district is $74,135. The average principal salary for the district is $130,819.

Starting in 2002, Orinda began hosting the Orinda Film Festival, an annual regional film festival taking place at the historic Orinda Theatre managed by Randy Holleschau. In 2005, actor William Hurt attended the festival to promote the film The Blue Butterfly in which he played a leading role. The festival was last held in 2005. The bright lights of the theater are visible for miles around during the night.

In August 2009, the California Independent Film Festival announced they will be making the Orinda Theatre their new home. CIFF held its first event in Orinda on September 18, 2009, in which a screening of The Birds was attended by actress Tippi Hedren. The 12th Annual California Independent Film Festival will be the first time the festival is held in Orinda, opening on April 22, 2010.

The internationally known California Shakespeare Theater, (a.k.a. “Cal Shakes”), performs from June to October at the Bruns Memorial Amphitheater (located on land leased from EBMUD in the hills north of Highway 24). The Theater’s conservatory operates throughout the year, featuring programs for children, teenagers, young actors, teachers and adults. The current artistic director is Jonathan Moscone, son of the late San Francisco mayor.

Orinda borders Tilden Regional Park, a 2,079 acre park that contains hiking trails, a golf course, Lake Anza and a Merry Go Round. The park is accessible via the Wildcat Canyon Road exit off of Camino Pablo (when traveling West).